I was a movie-crazy teenager, eagerly anticipating each newly-released star-studded movie. The books from which they were adapted were often re-issued in a movie tie-in edition, promising “soon to be a major motion picture” and “including 16 pages of photographs from the forthcoming film.” In 1967, at the age of fifteen, in anticipation of Reflections in a Golden Eye, I bought a paperback of Carson McCullers’ 1941 novel, and read it surreptitiously in my bedroom so it wouldn’t be confiscated by my parents. 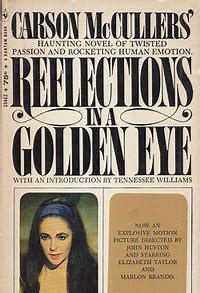 I didn’t realize I had never actually seen the movie. I do remember being fascinated by The Heart is a Lonely Hunter, the 1968 film adaptation of McCuller’s 1940 novel and but I didn’t know much about McCullers’ complicated life. 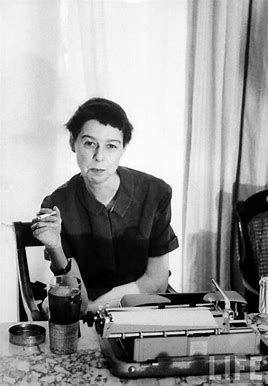 In 1937, at the age of 20, she married an ex-soldier and aspiring writer, Reeves McCullers. Carson and Reeves McCullers divorced in 1941, then remarried in 1945. During this period of separation, Reeves had a love relationship with the composer David Diamond. McCullers fell in love with a number of women and pursued them sexually with great aggression, but seems not to have succeeded in having sex with any of them. Her romantic obsessions included Gypsy Rose Lee, Katherine Anne Porter, and the Swiss journalist, travel writer and novelist Annemarie Schwarzenbach (1908-1942) to whom she dedicated RGE. “She had a face that I knew would haunt me for the rest of my life.” Queer cultural critic Sarah Schulman has suggested that “had McCullers been alive today, not only would she have probably been in A.A. and on antidepressants, she might have been living as a transgender man.”

Reflections in a Golden Eye first appeared in Harper’s Bazaar in 1940, serialized in the October–November issues. McCullers wrote the piece in 1939, originally using the title “Army Post”. She said the story had germinated when, as an adolescent, she had first stepped into the alien territory of Fort Benning, Georgia. A more direct inspiration came from a chance remark from her husband about a voyeur who had been arrested at Fort Bragg — a young soldier who had been caught peeping inside the married officers’ quarters.

The book was published by Houghton Mifflin on February 14, 1941, to mostly poor reviews. In 1948, severely depressed, she attempted suicide. She lived the last twenty years of her life in Nyack, New York, where she died on September 29, 1967, after a brain hemorrhage, at the age of 50. Only two weeks before the film adaptation of her novel was released.

In 1956 producers Harold Hecht and Burt Lancaster planned to adapt the book with a script by Tennessee Williams, with Michael Anderson directing. Tony Richardson hoped to direct this film with Marlon Brando and Jeanne Moreau in the lead roles. In 1964 Ava Gardner was announced for the role of Leonora Penderton.

John Huston enlisted Chapman Mortimer, “a fine Scottish novelist, not well known,” to write the screenplay, then reviewed it with Carson McCullers. In Huston’s 1980 memoir, An Open Book, he writes “The strokes had slowed her speech, and some words were slurred, but her observations were acute and pointed. She approved of the script.” Huston and Gladys Hill then incorporated McCuller’s suggestions and sharpened some of the dialogue. At some point Francis Ford Coppola is reported to have contributed some uncredited writing on the screenplay.

The role of Major Penderton was extremely physically demanding and the insurance company underwriting the production required proof that Montgomery Clift –the original choice for the Pemberton role–was fit enough for the role after his years of illness. Clift’s long-time friend Elizabeth Taylor committed her large salary as insurance in order to secure Clift for the role. However, Clift subsequently died of a heart attack before filming began. The role was reputedly turned by Richard Burton, Robert Mitchum, William Holden, and Lee Marvin, before Marlon Brando was cast. When Huston asked if Brandon could ride a horse, “he assured me that he had been raised on a horse ranch. Later, during the filming of the movie, I noticed that he exhibited such a fear of horses that presently Elizabeth Taylor, who is a good horsewoman, began to be afraid also. I wondered then, as now, if Marlon got this fear because he had so immersed himself in his role. The character he played had a fear of horses. It could well be.” (Still photographs of Brando as Major Penderton were used later by the producers of Apocalypse Now, displayed in the service record of his character Colonel Walter E. Kurtz.)

The completed film stars Marlon Brando, Elizabeth Taylor, with Julie Harris, Brian Keith and Robert Forster. Julie Harris also played Frankie Addams, 12-year-old tomboy in The Member of the Wedding, the 1950 play McCullers adapted from her 1946 novel, and was nominated for an Academy Award in the 1952 film version. Private Williams was Robert Forster’s first role. He went on to appear in Haskell Wexler’s Medium Cool (1969), The Delta Force (1986), and Quentin Tarantino’s Jackie Brown (1997), for which Forster was nominated for the Academy Award for Best Supporting Actor. This marks the only film performance of Zorro David (Anacleto). 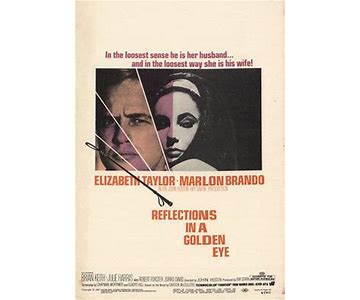 Some of the film was shot in New York City and on Long Island, where Huston was permitted to use the former Mitchel Field, then in use by Nassau Community College. Many of the interiors and some of the exteriors were done in Italy. It is interesting to note that the story which takes place on an army post, was published during WWII and released as a film in the middle of the Viet Nam war.

Toshiro Mayuzumi composed more than a hundred film scores between  1951 and 1984. The best-known is probably John Huston’s The Bible: In the Beginning (1966), for which he was nominated for an Academy Award and a Golden Globe Award for Best Original Score.

Huston recounts the story of the different versions of the film:

“Reflections is a psychological story. Vivid Technicolor would, I felt, get between the audience and the story — a story of minds, thoughts, emotions. So I was looking for a particular kind of color. Weeks and months [of experimentation by the Italian Technicolor lab] were involved, starting well before the commencement of the picture and continuing after the final shots. What we achieved was a golden effect — a diffuse amber color — that was quite beautiful and matched the mood of the picture.

When I sent the final print to the United States, I thought it was something of a triumph. Warner Brothers thought differently; they didn’t like the color. I fought this, and finally, using every threat, contact and influence I could muster, I got the studio to agree to make fifty prints in the amber color and to release these first to theaters in major American cities. The remainder would be make in standard Technicolor.

Every now and then someone comes up to me and says I’ve seen Reflections in the original color, and it is magnificent! Why did they ever release it in straight Technicolor?” So far as I’m concerned, the reason is that the sales department of Warners was headed by a man whose taste in color was shaped by early B pirate films: “The more color per square foot of screen the better the picture.

I like RGE. I think it is one of my best pictures. The entire cast turned in beautiful performances, even better than I had hoped for. And Reflections is a well-constructed picture. Scene by scene — in my humble opinion– it is pretty hard to fault.”

The film was released October 13, 1967 to mixed reviews and was unsuccessful at the box office: Variety called it a “pretentious melodrama” but praised Keith’s “superb” performance as the “rationalizing and insensitive middle-class hypocrite.” Time magazine described it as a “gallery of grotesques,” with the poetry of the novel missing from the film.  “All that remains praiseworthy is the film’s extraordinary photographic technique.” And Roger Ebert observed that the film was released without the usual publicity, despite its stellar cast and director. “Was the movie so wretchedly bad that Warner Bros. decided to keep it a secret? Or could it be, perhaps, that it was too good?” Ebert concludes the latter, praising all aspects of the production, but notes that the audience he saw it with greeted the film’s emotional moments with guffaws and nervous laughter.

Note the film’s advertising tagline: “In the loosest sense he is her husband. . .and in the loosest way she is his wife!”

In The Celluloid Closet Vito Russo writes that Reflections in a Golden Eye was released with a seal of approval despite John Huston’s refusal to make a series of cuts requested by the Catholic Office for Motion Pictures and the Motion Picture Association of America. In spite of a “C” (Condemned) rating the film gained wide distribution, something that could not have happened a decade earlier. One year later, in 1968, the Motion Picture Production Code was abolished altogether in favor of today’s “alphabet soup” rating system.

And the trailer ends: “Suggested for mature audiences. Leave the children home.”

A version of this essay was originally presented on August 15, 2019 to introduce a (35-mm Technicolor) screening of Reflections in a Golden Eye as part of SFMOMA’s Modern Cinema series, “Haunted: Gothic Tales by Women”.
The DVD announces “The restoration you are about to see replicates the Director John Huston’s original, stylized color design which uses muted color and warm golden tone to reflect the atmosphere and drama of this story. The feature appeared in theatres for just one week with this original color design before the studio imposed a full color treatment for general release, which did not reflect Huston’s original vision.”
I’d be curious which version readers prefer.