Walking around the neighborhood in a daze, I barely noticed my usual playmates. I was mesmerized by a black-and-white portrait of Steve Reeves. I received it last night at the Fox Anaheim when I saw Hercules Unchained and would not let go. I think I might have slept with it under my pillow, as corny and clichéd as that might sound.

I was so enamored I could barely walk down the sidewalk or into nearby yards to see what neighbor friends were up to. Admiring Reeves’s buffed bare torso, did I want to be him or touch him, or both? What did I know? I was eight years old. I was protective, possessive of my newfound idol. How was this different than the other boys’ obsession with baseball players? They bored me with scores and batting averages, traded baseball cards, and listened to endless radio broadcasts. I was never invited to join the teams they formed in the cul-de-sac, right in front of our family’s house. even if I wanted to be. What was the distinction between their Mikey Mantle baseball card and my fetishized picture of Hercules”? 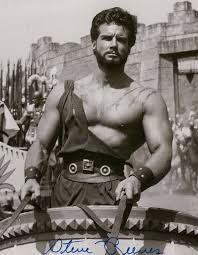 I remember that 3 x 5″ scrap of paper. It was glossy, as I see it again in my carefully cupped hand, and “signed”. I wonder what happened to it. Did one of the neighborhood bullies steal it from me, or did I wear it out, or lose it? With his well-developed torso, thick thighs, and dark curly hair, Steve Reeves was dreamy. It didn’t matter that the production values were cheesy, that he couldn’t act his way out of a chariot, or that the dialogue (at least as poorly dubbed into English) was laughable.

Was it because I was a wimpy bookworm, that I was attracted to he-men? I also like George Reeves (no relation). In his form-fitting Superman outfit, he too righted wrongs, rescued victims, and made the world a safer place. Might he rescue me from my boring suburban existence? Again, I remain confused: did I want to be with him, or be him. My pudgy, later gangly, body, was uncoordinated and not particularly strong. I certainly wasn’t going to enroll in the Charles Atlas bodybuilding program, no matter how many times I read the ad on the back of comics, or how many times the neighbor kids bullied me. 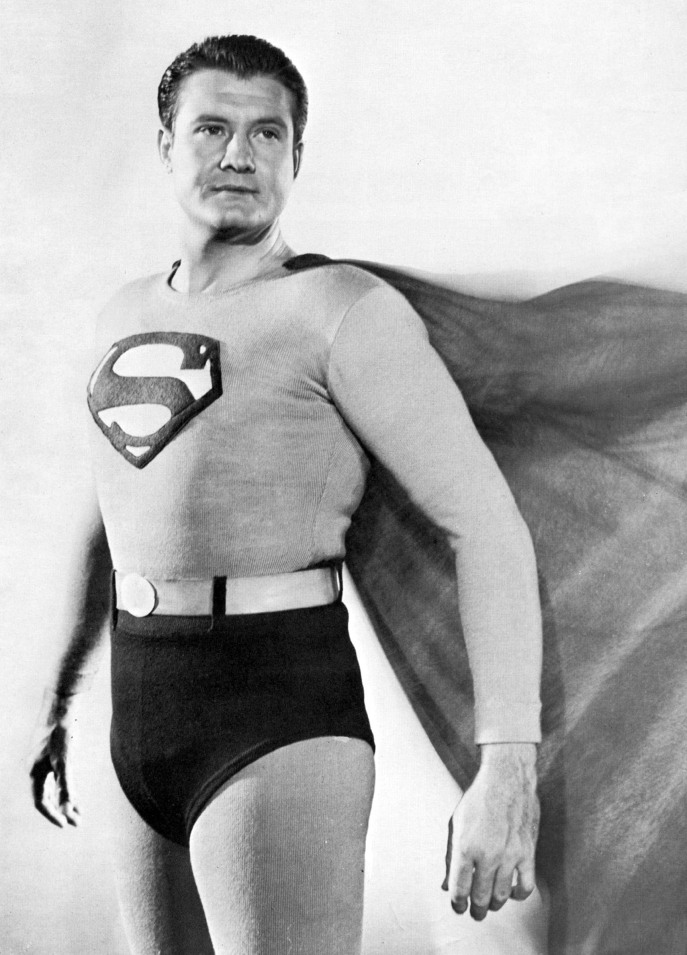 I came for the beefcake, hiding it even from myself, professing interest in Bible stories and Greek and Roman mythology. For example, my teenage fascination with Moses, as depicted in Cecil B. DeMille’s 1956 film, The Ten Commandments. I was fourteen when the big budget epic was theatrically re-released in 1966. I was fascinated by the massive sets, the special effects, and — especially –the men’s bare torsos and thighs.

I was even obsessed with original motion picture soundtrack album as if it might be exchanged for the soundtrack of my life. I saved up my allowance and splurged on the expensive double LP set of the score by Elmer Bernstein, listening to it incessantly and poring over the cardboard sleeve featuring color images of pouting Yul Brynner as Rameses and bearded Charleton Heston as the mature Moses.

When I needed a costume for the junior high Halloween dance, I couldn’t expose my skinny chest so I decided to masquerade as Moses. Using the image of Moses on Mount Sinai from the album cover, Mom and I shopped for brown and red fabric that she cut and sewed into a replica of Heston’s. Meanwhile I cut thick pieces of cardboard into the shape of tablets, and covered them with white butcher paper, onto which I copied random Hebrew letters from the World Book Encyclopedia to form what I hoped would look like the word of God.

Mom’s costume looked good, but I couldn’t very well wear my regular shoes. When I found the perfect pair of sandals, they were declared too expensive. Only after I promised that I would really wear them was I able to convince Mom to buy them. I ended up loving them, wearing them so frequently that for years my friends teased me about my “Moses sandals.” Would I have worn them so proudly had I known my favorite movies were referred to as sword and sandals sagas, or peplum, another condescending term I just now learned, referring to the tunic-style Greek and Roman garment often worn by characters in the films.

There was one more thing. By the time Moses received the tablets he had grey hair. Mom bought silver colored hairspray to cover my dark brown hair combed into its usual pompadour. I didn’t much resemble Chuck Heston, but the effort we put into the costume paid off: I won second prize at the dance.

Was all this an expression of affinity for the hyper-masculine, Republican NRA ambassador? Or an exploration of my blossoming homosexual self? And it wasn’t just Heston, though he was pretty sexy as Ben-Hur, and in Planet of the Apes. There was also Kirk Douglas as Spartacus, Robert Taylor in Quo Vadis, Richard Burton in The Robe and — be still my heart –Todd Armstrong in Jason and the Argonauts.

But my first, my favorite, remains Steve Reeves. And lest this turn into a Reeve-athon, did I ever tell you about meeting Christopher Reeve, on the set of Superman II? After showing me around Pinewood Studio, he offered to sign 8 x10 glossies. I was embarrassed to ask for one for myself, just for a handful of friends. 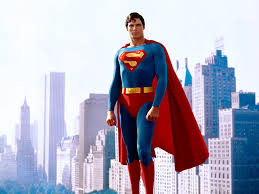 The Moses costume, tablets, and sandals are now long gone; over five decades later my hair is now naturally silver. One of my friends eventually took pity on me and generously gave back one of the glossies of Reeve in his tight costume showing off his sculpted body. It now hangs prominently in my hallway, a treasured souvenir of the days when the movies made me gay.